So Many Silenced, So Many Unnamed 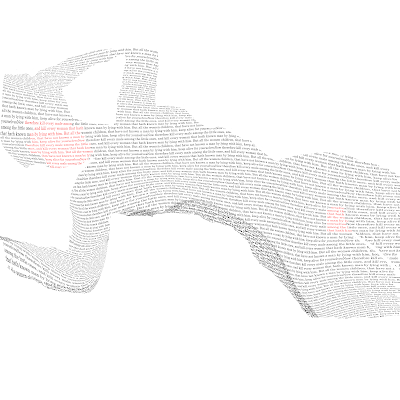 So Many Silenced, So Many Unnamed will respond to ongoing patriarchy and the oppression of women through visual poems which take passages from the Bible as found text. The Bible continues to be used to justify violence and hatred against women and other marginalized groups. The work will honour and celebrate women who are silenced, unnamed and erased.

The poems will take the shape of the female body using various clothing items from Biblical garments to mini-skirts and lingerie, iconic images and the naked body as represented in art and popular culture. The work is a celebration of women and a response to violence and abuse toward women, the male gaze, objectification, and exploitation, fatphobia, issues of beauty and acceptance and the poor treatment of women in the fashion and garment industries, extrapolating to the labour of women in general.

Evangelical and ultra-Conservative readers of The Bible have exploited its poetic language to use as justification for hatred and violence. Visual poetry is a way to subvert this literalism.

I will be working on this project for the next two months, and will post visual poems here. I will include research sources and also share information and resources related to ongoing misogyny and gender-based violence.

thanks to the Ontario Arts Council which funded this project through two Recommender Grants for Writers, and thanks to Invisible Publishing and the New Quarterly for recommending the project.