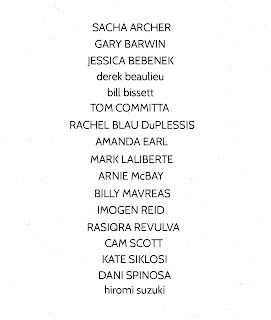 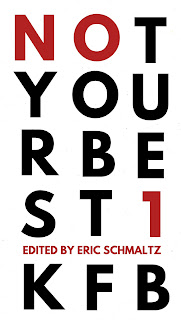 thanks to the editor Eric Schmaltz for including pieces from the Vispo Bible and Knife Fork Book for publishing NYB 1. the anthology is now available for pre-order. click on the link to purchase.
Posted by Amanda Earl at 5:14 pm No comments:

I was sad to learn that the visual poet, artist, poet, publisher bill dimichele had died on Sunday, August 4, 2019 at the age of 67. i knew bill as both a poet and a publisher. my small press, AngelHousePress published his work on NationalPoetryMonth.ca and in Experiment-O Issue 5. he also participated in the DevilHouse 6 interview, a series that explored the nature of transgression in creative work.

somehow, i don't remember when it happened or how, bill contacted me to participate in Tip of the Knife, his wonderful blog/site where published various writers and artists. he was always so welcoming and enthusiastic. i will never forget how much he welcomed me and encouraged me to play and be whimsical. For #15, i somehow misunderstood and thought he was doing a special issue on child art. i wasn't sure if i should contribute but the call inspired a series called Vizpo Kidz. He loved it.  In his introduction to the work, he wrote "I’ve seen a lot of Amanda’s work, and I’ve been happy to publish some; I always imagine the Angel creating her art out of laughter, lightheartedness and beautiful, whimsical energy.  Images made from inventive letter/picture coactions bring both amusement and sage excitement.  One of the most interesting aspects of these things is the titles, all twists on the pics - and who could not love titles like ‘Cinderella Snowflake’ and ‘Scuttling Sam Bones’?  Not everyone can make a crisp graphic work like Amanda can.  And no one else can put a head on it.

She may live in our newly constructed Age of Quasi Reason, but she’s not a slave to it the way some visual poets are, like those who construct little scientific systems devoid of soul and spirit.  Amanda may live in Candyland, but she knows how to tame the gum drops."

I was enchanted.  He published my attempts at autobiography as song titles in Issue 17. my earlier attempts at working with the alphabet in Issue 5 in 2011.

For Issue 11 from 2012, i was playing around with words, shapes. He wrote this about my work:

She has some cool space age themes going on with these pieces- simple so that our space voyager can take off with letters made of polished metal and plutonium retro rockets, excited to land, to spread new visual languages to the uninitiated aliens.  Amanda can do this, so I crown her Queen of the Universe.  These transformed glyphs are full of meaning to make the odyssey worthwhile.  Each page reveals a testament to exploration, fire and bravery.  Then there’s the piece about a crater where the ship has crashed, digging into the black extraterrestrial ground, exploding red astronaut blood which hovers above the surface in low gravity.  The red/black contrast itself is powerful enough to shatter the planet.  At first I thought 001 seed was outside the theme, but then I started thinking that some other  worldly race planted us and tended us.  Don’t look at me like that, it’s possible.

I was so pleased to be part of Tip of the Knife, which introduced me or reacquainted me with fellow travellers of whimsy and gave me the opportunity to be read by the great bill dimichele, a kindred.

i end this post with a quote from his own contribution to Tip of the Knife 32, the final issue.

This was when Billy first came unstuck in time.
His attention began to swing wildly through
the full arc of his life passing into death which
was violet light.

my condolences to his family, friends and all he's published and by published by. i will miss him.

post-script, all being well a few best of issues of Tip of the Knife will be published and edited by Crag Hill.
Posted by Amanda Earl at 7:55 am 2 comments: