finale-a sonnet for the end of our world 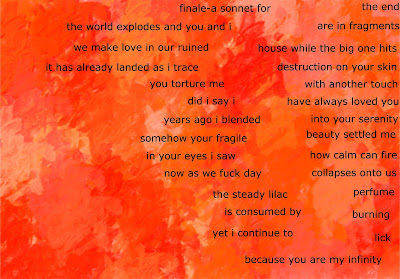 tales from the end of our world

reynold throws stones at the floor-to-ceiling windows of his penthouse apartment. water sluices from a functional sculpture, tumbling over paddle wheels, splashing on black rocks painted with the words “joy,” “gratitude,” and “sky.” a stunted bonsai lies on its side in the corner beside a lacklustre rubber tree plant. sometimes reynold hits. glass shatters, disturbs the sound of water, the gentle background music, the still leaves of the dusty plants.

denise likes to eat french pastry from larks, the latest trend in high fashion eating. you fill you cheeks with soft yellow cream and chocolate profiteroles, pause and spit. the thin and stylishly dressed waiter to your right holds a bucket and wipes your mouth when you’re done. you feels as if you’ve indulged in gustatory excess, yet when you leave you are empty. strangely empty.

zoe rides a harley hog across california’s coastal highway number one and listens to the grateful dead. she wonders about her mother, ashes and bone finally cold in an urn on her mantle in the family home where zoe dreamed of escape. she’s given her mother everything she wanted: non stop big screen colour television and the security that nothing will ever change.

bridget’s eye is still bruised from the old lady’s fists. she wouldn’t have sex with him, the man her mother sold her to. she discovers a gray army blanket and an old box of crackers. for the first time in weeks, bridget sleeps. in the morning her body is so frozen with cold she can’t feel her toes, her fingers. there’s a hole in the roof of the shed where she’s run to. winter light melts the ice. she opens her mouth and gulps.

david composes text on a typewriter, blots empty spaces with gray smudges caused by eyes that refuse to remain dry. he takes a sip of his morning martini and watches the words blur out of sense. a long list slides slowly down the refrigerator door, its overwhelming and impossible to complete obligations too heavy to be held by magnetic force. david shoots out six typewriter keys and saves the last bullet. t h e e n d

cassiopea makes the best pizzas in the city. the teenage boy watches the curves of her body bounce as she twirls another circle of dough in the air and laughs like she means it. his mother kicks him under the table and tells him to chew his food and stop gaping. his father folds the pages of the business section until the creases are so sharp they cut. while his mother goes to the ladies room and his father pays the bill, he steps through the kitchen and out the back door, a still warm ball of dough cradled in the palm of his hand.
Posted by Amanda Earl at 12:18 pm No comments:

the end of our world-a poem cycle


turntables rewind empathetic breath
until tuesday the stars
rescind hills folded over egg
whites of rivers, eye lids
shutter before after
yolk rises in the east
sets elsewhere
eel or jelly crust unbaked
stuck to the bottom of
bellows suck and fan
the blastfire
finale


the prince counts hands in the valley
while his wife searches for shoulders
in the kitchen
and the butcher needs meat to chop
gristle for the chattering teeth
chew 32 times a feast of galaxy
burn wholes in celeste’s brand
new night table cloth
the dog ticks frenzies from his collar
hind leg thumps to the renaissance
beat of under
again a question breaks the window
Posted by Amanda Earl at 12:16 pm No comments:

for this week's workshop class, rob asked us to go to the website PENNsound and listen to bpNichol and Steve McCaffery and write something in response. my response is below and the poem cycle i wrote is the entry after this one.

Steve McCaffery - love his language, it goes all over the place. with his work i like to read and hear it. silly at times, such as “what as poetic”:
“the rain in spain falls mainly on mark twain” “an avant garde a kierkegaard”
just so full of rhythm and implausibility, fantastic. absurd “poetica, helvetica, ars poetica.” “when i grow up i want to be a version of a virgin of a brain surgeon” all kinds of unlike ideas put together. “a walnut covered walrus” what happens when you let your mind run free in association with sound? [on a side note, i enjoy also his idea of poetic research being different from other kinds of research in that it is a reaction or response or inspiration rather than necessarily a comment on it, pataphysics, beyond the metaphysical and a parody of science...all fun! love his seven pages missing volume one.]

in bpNichol’s sound poetry, single syllables are emphasized, his word associations are based on sound rather than concept, there’s often strong & sing song rhythms to his poems and he also plays with pitch. some of his poems are like tongue twisters.

also Bill Bissett’s Lullaby from Motherlove-love the language of an unknown or invented language; see how sounds alone can create an atmosphere; this is soft, repetitive like a lullaby.

the addition of sound effects is so much fun; shows you there really are no limits; folks like antonin artaud and william s. burroughs played with all of this years ago, yet it’s still treated as something new. they played with sounds alone, added effects, slowed down and lengthened discrete sounds, distorting them. to me it’s like going deep inside language to really consider it and analyse it in depth, slowing down each individual sound like an isolated moment. this to me is what poems are...the isolation of a unique moment and its articulation on paper or in the air. today folks like max middle and jw curry here in ottawa, a. rawlings in toronto and others all over the world are creating sound poetry. it’s as exciting to me as visual poetry and every other media being used.

i dig the idea of removing and or playing with expected patterns of meaning. seems to me that changing languages is one way of doing so. i fell in love with words for their sounds more than their meaning. i have always spoken my poems out loud and the poems of others. as a child i would repeat and still do, little phrases and words, such as “the theory of plate tectonics” my favourite phrase and “lugubrious.” I love what these sounds do to my tongue, how they fill my mouth, how they resonate in my brain: “the murmuring of innumerable bees”-Tennyson.

in one of the music classes i can still remember from grade school the teacher has us listen to peter and the wolf and tell her what we were hearing without knowing the story. i was fascinated by the way music and sound alone could convey mood and tone, could tell the story without words.

i have always played with language, inventing my own as a child. this exploration of sound has brought me back to that playfulness and the idea of invented languages.

in this poem cycle, “8 planets speaking in tongues,” i’ve chosen vocabulary from existing languages and also added my own invented words. i haven’t chosen the words for their meaning, but rather for their sound. the sounds are meant to have onomatopoeic associations with specific atmospheres...let me know if they do...
Posted by Amanda Earl at 9:39 pm No comments:

to be published by my self-publishing imprint Angel House Press and to be launched at the ottawa small press fair along with two other chapbooks on june 16, 2007
Posted by Amanda Earl at 12:17 pm No comments: