notes from my response to hannah weiner's poems 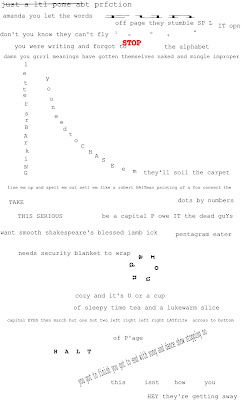 hannah weiner’s little books/indians came along when i’ve been feeling frozen by the cold beauty of the perfect. writing like hannah’s seems closer to the bone, more real to me than the writing of someone like don mckay lately. a good friend suggested it’s all about timing and what we need at a particular moment. at this moment i am not inspired by beauty but by messes, holes and ambiguities. i don’t want a writer to fill in all the blanks for me, i want her to leave the space open, so i can breathe.

hannah addresses herself directly, makes colossal typos and spelling errors, changes apostrophes to esses, fucks around with subject verb agreement and linearity. nothing is sacred. within all that is a painful honesty. she makes up words, she references other writers, like ron padgett. she sticks in clichés, she messes with the order of ideas, and even splits words apart.

she began writing poems in her mid 30s, no reason why she waited until then, just twenty years went by. she went to the new york school and was bored to tears by the poetry of writers like kenneth koch. her most well known book was the clairvoyant journal. she saw words on people, on things, giant 8 foot words. in an interview with charles bernstein for penn sound, she said:

more stuff from the interview and other sources:
are you ever embarrassed about the triviality of thought – cb?
i don’t have time to be embarrassed

i bought a typewriter; i had 3 choices ordinary words, italics and capital letters, that settled it

how can you not be avant garde if you’re the only person in the world who sees words.

cb says that “One of Hannah’s most enduring achievements as a writer was her unflinching, indeed often hilarious, inclusion of what, from a literary point of view, is often denigrated as trivial, awkward, embarrassing, silly, and, indeed, too minutely personal, even for the advocates of the personal in writing.” jacket 12
http://jacketmagazine.com/12/wein-bern.html


it’s not easy to go thru her writing. at times she loses me with all the stretching and playing around but i don’t mind that. it’s good to be lost and i know i can go thru her stuff again and notice different bits.

at the same time i’ve been going thru steven ross smith’s book flutterlongue-the book of games. not only does he play around with sound, but he also messes with form and linearity. in some interview i listened to on line, steve mccaffery said that when you take away cues for literal meaning, it forces your reader to look for other patterns of meaning, such as sound. i’m excited about this idea. i think it also extends to form. when you take away linear patterns, how does that affect how readers read your poems? folks like weiner and ross smith are opening up poetry for me, making me want to throw some sand out of the sandbox too.

[click on pic to enlarge poem]
Posted by Amanda Earl at 7:55 am